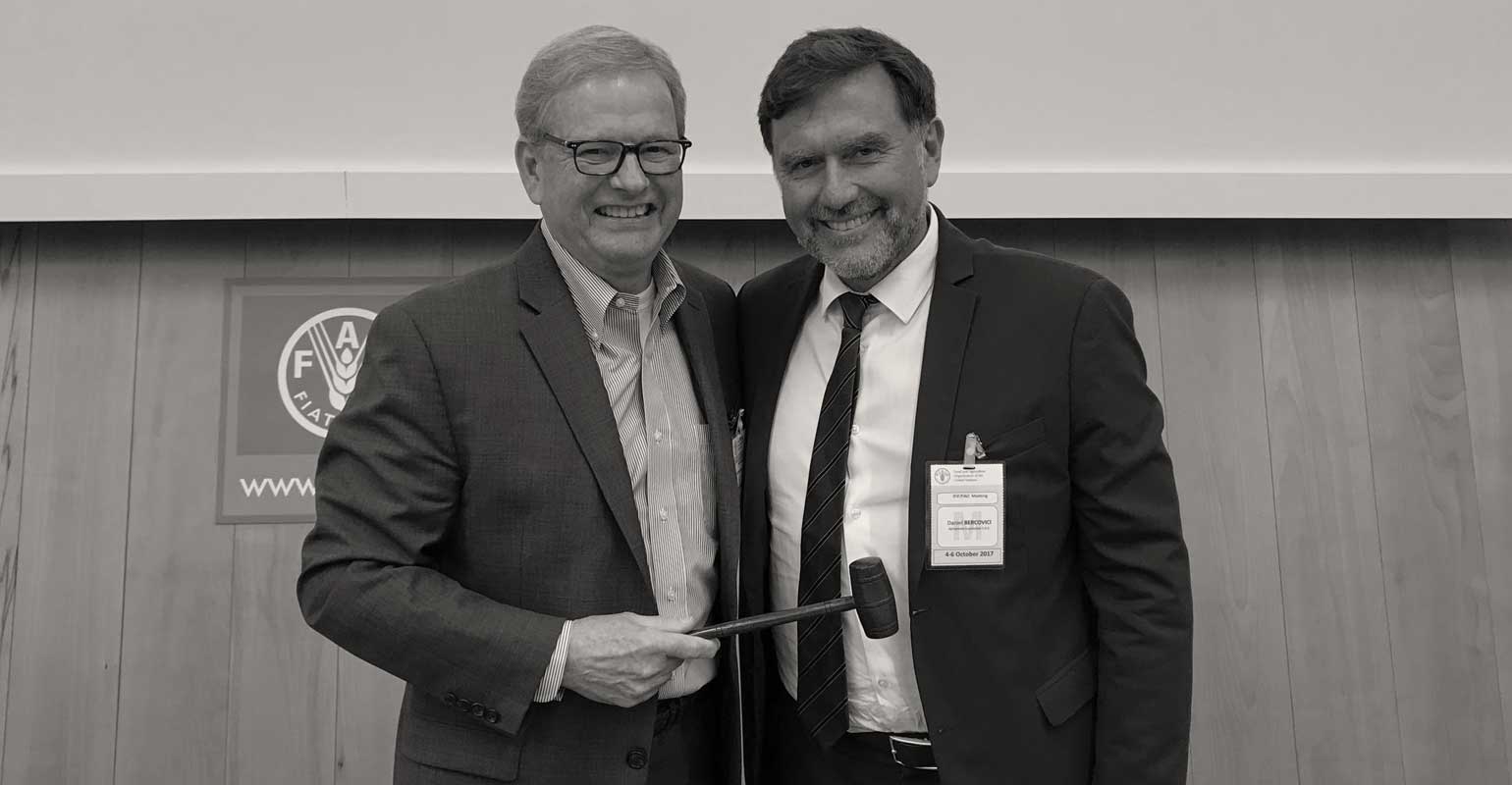 Delegates at IFIF’s 30th Annual General Assembly elect new Chairman and Board of Directors for 2018-2019 term.

Outgoing IFIF Chairman Joel G. Newman, President & CEO of the American Feed Industry Association (AFIA), led the Federation for the last two years and formally handed over the IFIF Chairmanship at the General Assembly in Rome, where he welcomed Daniel Bercovici’s election: “IFIF is at a critical phase of implementing its strategy in the face of important global challenges and opportunities in the food and feed chain and Daniel Bercovici is well placed to lead the Federation to contribute to the growth of a sustainable feed industry worldwide.”

Dr. Bercovici thanked Joel Newman for “his great leadership of IFIF over the last two years and his dedication, value and expertise, which he continues to bring to the Federation at the highest levels since joining the IFIF Board of Directors more than a decade ago.” He also thanked “all IFIF Members for their contributions to our success, which strengthens IFIF as the united voice of the global feed industry to promote and support sustainable, safe, nutritious and affordable food for a growing world population.”

On accepting his two-year term as Chairman, Daniel Bercovici highlighted that “through IFIF’s efforts and partnerships we continue our clear focus on IFIF’s three strategic pillars, including (1) regulatory to promote a balanced regulatory framework and support the dynamic pace of innovation, (2) sustainability with science-based standards to contribute to the measurement and management of the feed and livestock sector footprint, as well as (3) education & best practices, including such key initiatives as the next Global Feed & Food Congress in Thailand in March 2019 and IFIF’s ‘Global Animal Nutrition Programme – Train the Trainer’ in Africa.”

He added “as we work together with our partners and stakeholders, IFIF will continue to champion science-based decisions, the need for continued innovation and better technologies, as well as regulatory convergence and free and fair trade.”

Dr. Bercovici previously served as Chair of IFIF’s Sustainability Steering Group and as Chair of IFIF’s feed safety Capacity Development Programme, as well as a Member of the IFIF Board of Directors. He has more than three decades of diverse executive experience with the Ajinomoto group, including in Brazil, Europe, Mexico and North America and will bring his longstanding experience both with IFIF as well as international feed industry matters to the role of IFIF Chairman.

Delegates to the IFIF 30th Annual General Assembly also elected the following representatives and organisations to the IFIF Board of Directors for the 2018 – 2019 term:

About IFIF
The International Feed Industry Federation (IFIF) is made up of national and regional feed associations, feed related organizations, and corporate members from around the globe, representing over 80% of the feed production worldwide. IFIF provides a unified voice and leadership to represent and promote the global feed industry as an essential participant in the food chain that provides sustainable, safe, nutritious and affordable food for a growing world population. For more information on IFIF contact Alexandra de Athayde, Executive Director, at info@ifif.org.